One of the most frequent questions I get asked is: ”Which is the best wine?”Well the simplistic answer is it does not exist. A different approach yields something closer to the outsiders well meaning query, more on this later. Nemea remains a mine field. As commented in these pages the majority of the charmer grape Agiorgitiko are not virus free. There are recent healthy plantings in a number of addresses. The Bakasieta clone from the eponymous nursery is such a complete picture the difference is obvious even to a novice. On a catch up visit after tasting it was telling that we took a bottle and went for supper at a nearby village of Gymno. The wine was made from young vines and had not seen any form of oak, cement or the in vogue jars. Packed with fruit with no angularity in sight. It just had that irresistible caché of wanting to drink it. Until these new plants increase and come on stream it will take time, we are looking at 7-10 years. So what until then? Does the ‘best’ Nemea exist or is it another futile holy grail chase. If you look at it from a different perspective there is an example worth exploring closer. Ever since this historic(1913)address started to bottle(2003) selected batches they have made a clear statement in a number of styles. Their Red on Black Nemea is in it’s class and price bracket a leader. Vibrantly fruity capturing the youth full expression of Agiorgitiko. It is not an easy going bubble gum maceration carbonique nouveau look-alike. There is gravitas as it ages a lot better than many ambitious Nemea’s. It is not an easy blend to achieve. It is crafted into an elegantly structured wine. After experimenting by using a drop of the reviewed wine with some Red on Black it is clear that blending has it’s own rules. This did not work as my 11 o’clock false epiphany was at least instructive: lacking clarity in style of the Mitravelas blend. It actually clouded the ‘picture’. In most crafts logic does not hold as they have a discipline and dynamics all of their own. 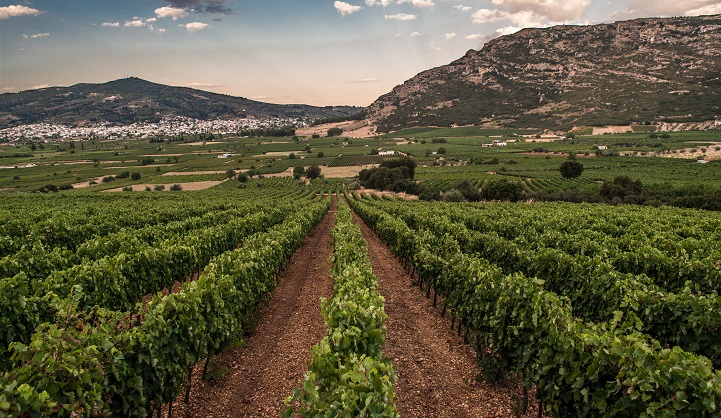 There is another factor that has shifted in Nemea. Since 1998, wider climate swings alter its profile: sometimes towards the worse and some years towards the better though with a caveat. The size of grape berries fluctuates. 2001 was elegance itself. Does anyone remember 2007? The heatwave shrunk the berry size by 40%. A few, were a lovely wines though in style, far removed from Nemea’s juicy fruit fluid charms. At that point my reference was Gaia Estate, the wine that put Nemea on the map with the trail blazing multi award winning 1997. A recent tasting of the broader richer 2000 vintage aged in a Swiss cellar was still a convincing statement enjoyable to the last drop. If you think again that Nemea does not age, think again. Discovered in a cellar on Crete Lantides Nemea 1998 are now drinking as a feather light aged silky Burgundy.

Outsiders who never actually meet Kostas Mitravelas half jokingly ask if he exists? He is not a people person and remains distant. There is good news for us commentators as Demetri Akrivos has joined Mitravelas. He is one of the more articulate savviest consulting oenologists on the scene. He spends his time between near by Mantinia at Troupis vineyards and winery working with the grapey Moschofilero and Nemea. Only seasoned consultants can map a way forward and lose no time in fine tuning. 2017 was a good vintage though they are not all pretty wines as drought stress issues can be felt in angular fruit lacking tannins. The most obvious changes in the Mitravelas Estate is terrific fruit, freshness, depth coupled by seamless oak. Long time readers may be confused by the label changes. This one replaces the old black label with the blue stripe escargot adorned label. My point is that this wine in this vintage currently captures Nemea’s elusive character. If this is what you are looking for then it will reward your search. It also goes to show that economic crises forced further realities in the Greek vineyard, in this instance, ego-less teamwork synergies. Now that is worth celebrating.

Diam 10 beeswax. Vivacious purple rimmed a little less deeper in colour than previous efforts. Hedonistically perfumed like only great Burgundy can express. Young though not raw. Dark fruits. From the on set a freshness and depth never previously seen in this wine. The fresh theme continues on the seductive juicy blueberry mid-palate. Follows with crunchy sour cherry notes and graphite smoke. Fine grained tannins with bitter chocolate notes. A hint of creamy ‘sweetness’ on the bone dry finish. Refreshing twist on the aftertaste. A triumph of great sites with modern pro active know-how, a giant-killer. 2019-2028.