Nothing prepares one for the change of natures landscape on Crete. The only near constant are olive trees and vines. Pines, several types of oak and of course herbs as sage, oregano and thyme are abundant. As one enters the hinterland from Heraklio en route to the village of Vorias(350m) it changes again with clusters of plane and cypress trees. Gavalas is a land owning family with 30 hectares of vines in scattered parcels. They are replanting Malvasia di Candia and hedging their red wine future on Mandilari. Soils are sandy and clay loam these rolling hills reach 450-80m. Since 2002 all vineyards are organic. Fragospito, ruins of a Frankish period house, now gives the name place to several of their single vineyards. Vorias, home to 50 inhabitants have gone organic with their olive farming. We are talking of valley and peaks comprising some 370 hectares. There are though other such movements through out Greece though this is a first for me. Time has been kind to this hamlet. It has kept intact much of its character. 37klms inland from Heraklio’s port, it bears little resemblance to the creamy limestone where the mass of the island’s wineries on are to be found. 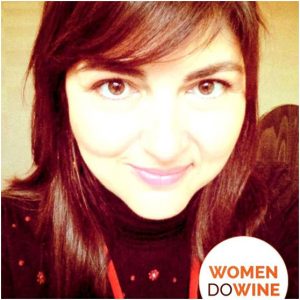 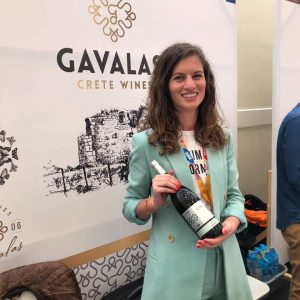 During my beat one of the most important shifts has been the increase of women in wine. Stavroula Kourakou was the first significant major figure bursting on the scene in late 1960’s. Others more recently include Lisa Vitzileou who has returned after growing up her family and chemist turned teacher extraordinaire Maria Tzitzi. Will spare you further name dropping and focus on Katerina Karampatea. For years she has been quietly working as a consulting oenologist and has much to show for it. When I first tasted the reviewed wine in the 2017 vintage it was a too good to be true alert. Further research unfolded a scenario and cast of characters including super consultant Kyriakos Kynigopoulos or as he is known in Burgundy where he is based as ‘ Le Grec’. Karampatea who studied and worked in France had worked at Kynigopoulos Burgundia consulting agency. While on holiday in Crete and a chance meeting with Nikos Gavalas, it was Kynigopoulos who suggested the now Drama based Karampatea. She saw the potential of unlocking this for with few exceptions underperforming white grape on Crete. She was proven right again in step above 2018 despite the climate change vagaries on Crete and elsewhere in Greece. Vilana shares with Assyrtiko an oxidative variety and demands immediate protective action. Something that Nikos Gavalas and Karampatea’s guiding hand seem to have found answers to. The reviewed wine is a semi-aromatic spicy floral expression with few equals now on the scene. The women in wine continues to grow up and down the country. Anna-Maria Gavalas is bringing a breath of fresh of air with a younger following to this under revival address. Actually the lack of ego in professionals like Katerina Karampatea proves how vital women are in the on going quality revolution.

Organically farmed 22 year old vines. Diam 5 cork. Attention in the details such as rigorous cluster selection. Pale golden, a mix of botanics and faint floral muscat aroma which opens up to a more fruity spicy spectrum. Viscous richness with a invigorating lemony thread on well-rounded bone dry palate. A good effort in a challenging vintage. More expressive and gravitas than most other varietals. Finally tapping into the potential of this unique to Crete grape. Bursting with flavour at only 12,1% ABV, the previous warmer vintage was 13,2% ABV. 2019-2023.